Posted on February 16, 2013 by jothetartqueen 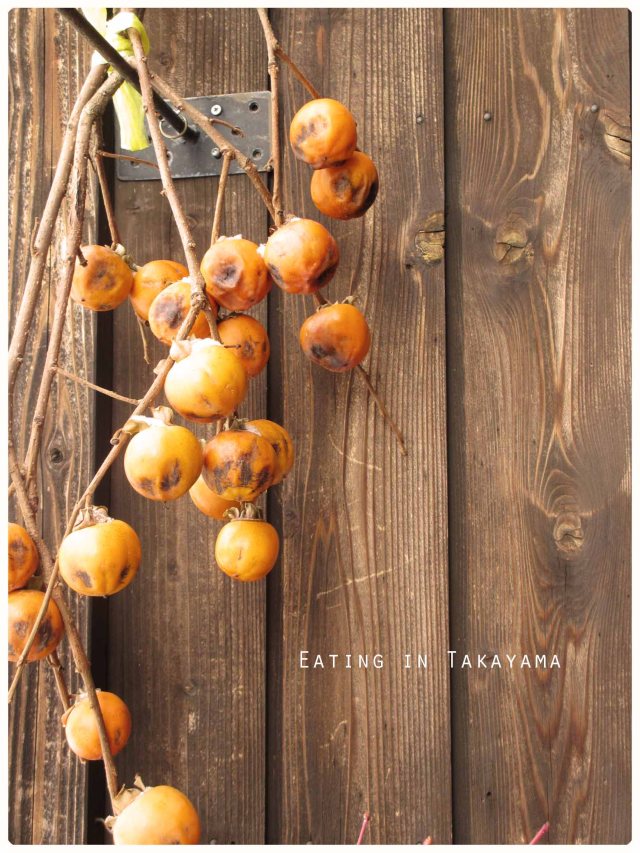 As much as Takayama is a beautiful small town, I have to say that the food in Takayama is the real star. Food may be a big reason why I enjoyed my time in Takayama so tremendously.

In this post, I hope to share with you my experiences with the local food and produce over the short course of my stay. 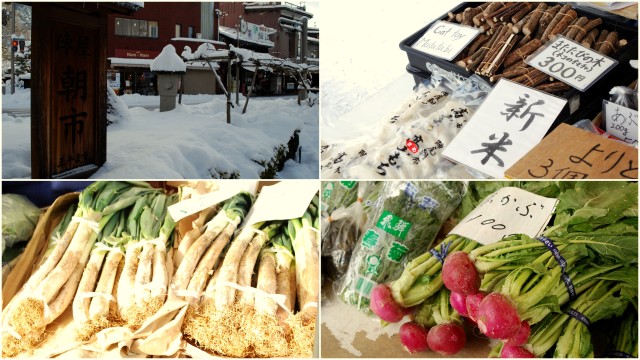 Local produce at the morning markets

I love stopping by the local markets to get a feel of the food, life and culture of the place that I am in. While I was in Takayama, I visited both of its morning markets – Jingya-mae and Miyagawa as I’ve briefly mentioned in my previous travel post on Japan, Winter dreams in Central Honshu.

While you are at the market, why not try their big, crunchy and saccharine sweet apples, and sample some of their tsekemono (Japanese pickles) like the red turnip or other Hida vegetable.

I bought some rice cakes that were made from grains grown in the Hida mountain region. They came in a variety of flavours like almond, nori, green tea and they were fantastic. And they are even better when they are in the form of rice dumplings (dangos) basted in soy sauce and grilled on skewers – Such intense flavour to complement a nice, chewy texture! I have to warn you not to get carried away with the buying of these rice cake products; I bought quite a couple of packets and they turned rock hard by the time I got back to Singapore! Bummer.

Since winter marks the persimmon season, we saw persimmons both fresh and dried being sold. We bought some dried persimmons to eat along the way- they were still very large even after being dried and I can’t begin to describe their sweet intensity!

Take time to look at the local vegetables at the market – you would find an abundance of leeks and red turnips, and a good variety of  Hida vegetables. If I had a kitchen, I would definitely be doing some cooking with those wonderful produce.

Miyagawa Morning Market
Along the Miyagawa river, East of the JR Takayama Station
Opening hours: 6 – 12 noon (7am during winter) 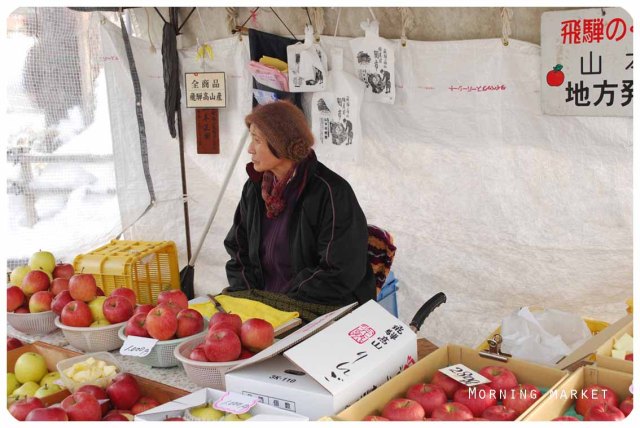 The hot and steamy bun was particularly welcoming after a long walk in the cold. The filling was minced Hida beef  and finely chopped vegetables and the gravy was enough to keep it moist and flavourful. Worth a try if you ask me.

They can be found in several small shops around the Old town area like the one that I went to.

Hida beef ranked very high on my to-try-list while I was planning my trip. I’m a beef lover and after reading up on Hida beef, I was more than excited to try it!

Hida beef is from the black-haired Japanese cattle reared in the Gifu Prefecture for at least 14 months. The beef then has to go through stringent grading and certification on the Japanese Grading boards before it can be sold as Hida beef.

We settled down at Bandai Kado store which was highly recommended by many Japanese magazines. It was not too hard to find the place with some help from a local.

I settled for the grilled Hida beef set which I felt was the best way to try the beef. It did not disappoint.

There’s almost little or no preparation for the beef;  just a mini coal based grill stove that allows you to grill the beef before you eat it. The beef simply melts in your mouth and the flavour….it was perfection at its pinnacle, if you can even call it that.

We also tried the Hida beef in the form of sukiyaki. If you like a pot of stew, sukiyaki may be your answer especially during winter nights. Just be sure not to overcook the thinly sliced Hida beef slices as you would still want to allow the beef fats to melt in your mouth.

While you are at Bandai Kado, check out their immensely popular all-vegetable set. This set is beautifully created with colourful vegetables in the mountain regions of Hida. It was unfortunately sold out by the time we got there in the evening. 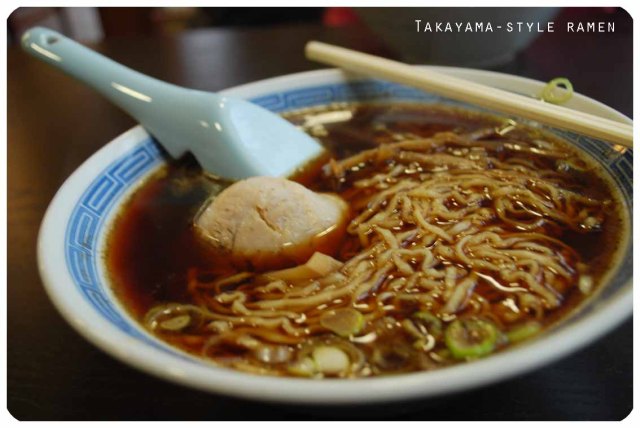 It may be very confusing to see a ramen shop named Musagosoba. Why soba when it sells ramen? Well, I’ve learnt that ramen is often referred to as Chinese styled Chuka soba in Takayama. So when you order soba in Takayama, don’t be surprised to be served a bowl of ramen!

Takayama style ramen was one of the first things I ate in Takayama. I had mine at Musagosoba.

I read about Musagosoba in a Japanese food guide and got my friendly hotel concierge to help me with the directions. We made a few wrong turns but I’m glad that we found this place because our lunch here really made my day!

This style of ramen served at Musagosoba is very differently from its Tokyo, Sapporo or Hakata counterparts. The first difference you would notice is the colour of the broth – it is a lot darker in colour. You might think that it would mean a too salty broth. I thought so initially but was proven entirely wrong. The broth is not overly salty, surprisingly light but packed full of umami flavour. It was so delicious that I finished almost the entire bowl of it.

The broth is made with dried bonito and soy sauce. The noodles used are thinner than the ones that I’m used to but still springy the way I enjoy noodles. It is served with leeks, char siew (roasted pork) and menma (marinated bamboo shoots).

Though it’s a one-dish meal, it was hearty and warming. We enjoyed the ramen here so much  that we came back the next day only to find it closed (it was a Wednesday). 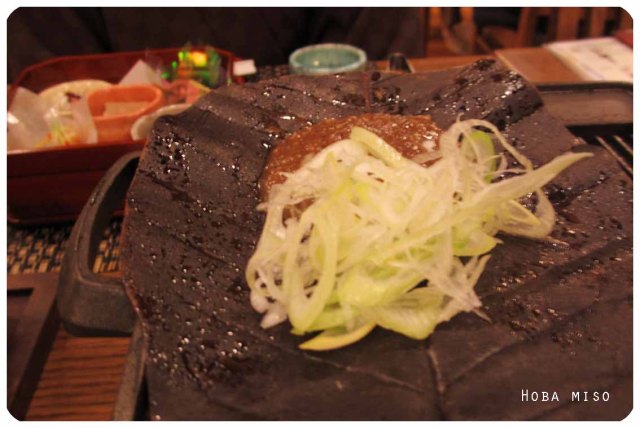 Lastly, I’m going to introduce one of my favourites in Takayama – the Hoba miso. Hoba miso is a specialty of Takayama. It is miso served on a dried magnolia leave and broiled over a small coal stove. Hoba miso is usually served with Hida vegetables like leeks, straw mushrooms and onions and a bowl of rice. I’m surprised at how much I actually like this simple dish. The flavour of the magnolia leave permeates through the miso paste as it is being broiled. I ate this almost everyday while in Takayama. My only regret is not buying some miso and magnolia leaves to recreate my experience back home.

The food in Takayama may be simple, unpretentious and very much produce-centred, yet it manages to steal my gut and heart so swiftly, and so completely. I hope it captures your heart too!

My first love is eating. A very close second is my love for baking and cooking. I passionately believe that the best form of appreciation of something is almost always through the creation of it. This passion took me on a whirlwind, unforgettable ride through the patisserie diploma course at Le Cordon Bleu (Sydney). Join me on my discovery for the love of food – through the kitchen, through the markets, through experimenting, tasting and loving.
View all posts by jothetartqueen →
This entry was posted in Travel and tagged chuka soba, eating in Japan, 高山市, Food in Takayama, Hida beef, Hida-gyu, hoba miso, Takayama, travel, travel photography, travel: Japan. Bookmark the permalink.

23 Responses to Eating in Takayama, Japan