Posted on November 17, 2012 by jothetartqueen

I am a great fan of Japanese pastry chef, Sadaharu Aoiki. He opened his first patisserie in Paris where he honed his skills before opening his pastisserie in Japan very much later. He is a master of French pastries and takes inspiration from Japanese flavours and ingredients.

It’s uncommon that you see the use of sesame, matcha, ume, yuzu in his pastries and cakes. One of his brilliant adaptations is where he made a Japanese inspired version of the Opera cake. This cake, “Bamboo”, is made with layers of matcha buttercream,  matcha jaconde  and dark chocolate ganache.

He is also the master behind the most divine matcha éclairs. I remember being blown away by them when I first tasted them during my trip to Tokyo a few years ago. I’ve always wanted to recreate them but I didn’t until now.  A little late, I admit. But better late than never. 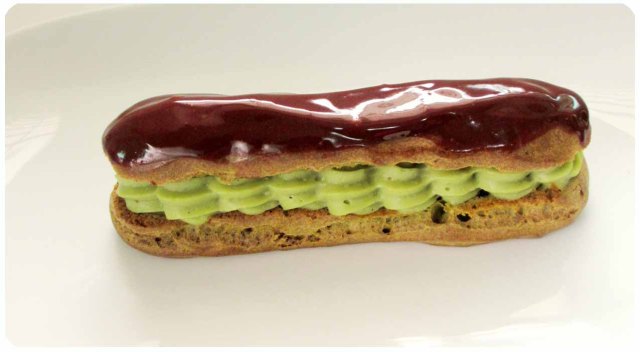 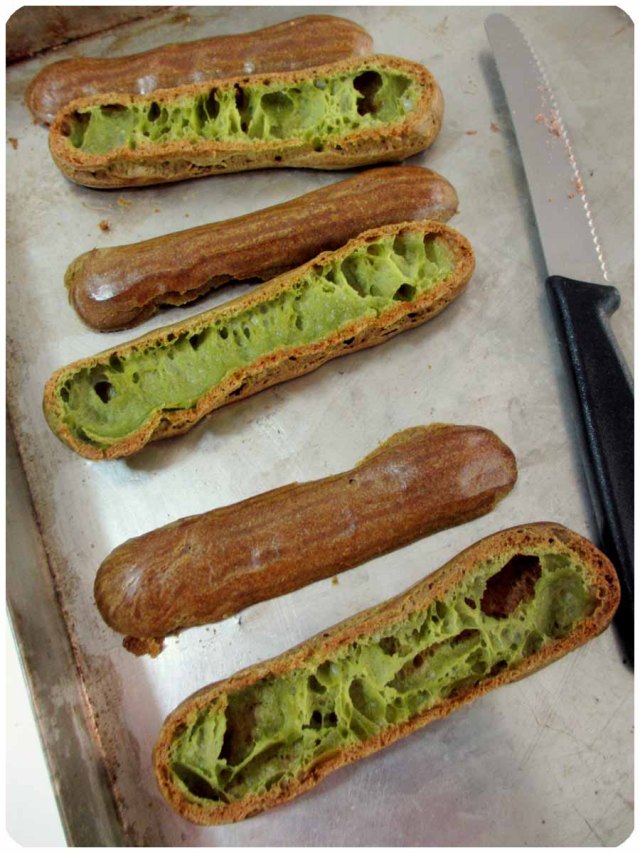 I made a matcha choux pastry as well as a matcha creme patisserie but chose to give it a dark chocolate glaze instead of Sadaharu Aoiki’s use of matcha fondant.

I really like how matcha and dark chocolate complement each other. And the way the green contrast itself against the dark brown is such a stand out. I can’t quite say how much I’ve enjoyed this éclair. Maybe even more than the traditional French éclair that is a plain choux pastry filled with vanilla bean creme patisserie and glazed with fondant).

I would make this all over again in a heartbeat. Its flavours are absolutely lovely. I think I am happy enough with these Aoiki substitutes, it is surely much easier than having to fly over to Tokyo or Paris whenever the craving strikes.

All I need to do is to pipe more uniform éclairs (length and width) and to give those éclairs a neat coat of that chocolate ganache that even Sadaharu Aoiki himself would be proud of.

I was inspired by Sadaharu Aoiki to make these matcha éclairs. I’ve added matcha powder to the choux pastry and creme patisserie (pastry cream). This gave it just the right amount of green tea flavour. I’ve used a simple dark chocolate ganache glaze to ice the top of the eclair. I think it’s important to use dark chocolate as dark chocoalate complements the green tea flavour completely while I don’t think milk chocolate does quite the same.

(I used my go-to recipe for this. See my previous post for a more detailed guide on how to make the perfect choux pastry)

for the egg wash: (or use your preferred egg wash)
1 egg yolk
dash of full cream milk
pinch of salt

1. Prepare trays for baking the choux by greasing it with butter so that they would not stick on the tray.

2. Place water, milk, butter, sugar and salt into a pot and bring it to a rolling boil. It should be bubbling furiously.

3. Remove the pot from the heat or turn down the heat and pour in all the flour and matcha powder at once and stir immediately and vigorously with a wooden spoon/spatula.  Ensure that there is no lumps of flour in the *panade. Cook out the mixture over low heat for another 2-3 minutes. You should have a glossy panade that can be formed into a ball that comes away from the sides of the pot easily.

4.Remove the panade and place it into your machine mixer bowl. Using a paddle attachment, put the machine on low speed in order to cool the panade down for about 5  minutes. You wouldn’t want to add in the eggs when the panade is still hot. You may end up scrambling the eggs. Remember that eggs start cooking at 60°C (140°F).

5. When the panade is not hot to touch, with the paddle attachment still on, start adding the eggs one at a time at medium speed (speed 4 on the Kitchenaid mixer). The mixture may look like it has cuddled and split at first but be patient and allow the machine to do its job to emulsify the mixture. It will come back together in a while.

6. Continue adding the eggs until you get a smooth, thick, glossy paste. When you lift up your spatula, it should fall after roughly 3 seconds. It should be able to fall from the spatula on its own but not be too wet that it can’t hold its shape. You may/may not require the entire amount of eggs as stated in the recipe, depending on the consistency of the choux paste.

7. Place choux paste into a piping bag with a plain nozzle/star shaped nozzle. Pipe them as evenly as you can and spacing them apart,  about 12-13cm  length, about 2cm width. Do not flick the piping bag or when it bakes, it will form ugly cracks and seams and it would not rise neatly and evenly.

8. Egg wash the choux pastry with a brush and at the same time flatten down the little tips. This is to ensure that the tips do not burn.

9. Bake immediately at 180 degrees celcius in a pre-heated oven for about 50 minutes to an hour. Choux pastry must be thorougly baked. if the sides of the walls are moist, when removed from the oven, steam will condense back into water and the still-wet walls will recoil. This will cause the choux pastry to collapse/ and flattened itself.

10. You can check if the choux pastry shells are properly baked by removing a shell from the oven and tear it apart to see if the entire choux is dry. Only remove the entire batch when they are dry.

11. Fill these choux pastry with the matcha crème patissière only after they have cooled completely. You can either slice off the tops with a serrated knife or using toothpick to poke a hole at the bottom of the choux pastry before piping the filling.

1. Heat the cream and glucose in a small pot over medium heat. Stir occassionally. Allow the cream to come to a boil.

2. Pour the cream over the chopped chocolate and butter. Stir to combine until uniform.

1. Slice the cooled eclairs with a serrated knife, lengthwise. Since they are baked thoroughly, they shouldn’t be soft and should maintain its shape so that they can be sliced easily.

3. Dip the top half of the eclair into the dark chocolate ganache glaze. Use your fingers to clean away  the sides and assemble the top and bottom halves of the eclair. 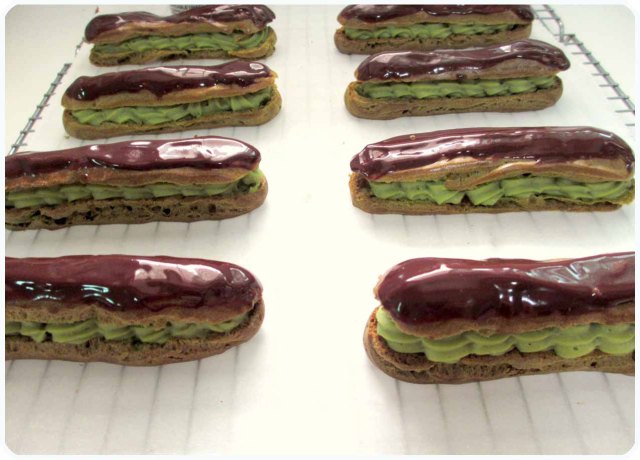 My first love is eating. A very close second is my love for baking and cooking. I passionately believe that the best form of appreciation of something is almost always through the creation of it. This passion took me on a whirlwind, unforgettable ride through the patisserie diploma course at Le Cordon Bleu (Sydney). Join me on my discovery for the love of food – through the kitchen, through the markets, through experimenting, tasting and loving.
View all posts by jothetartqueen →
This entry was posted in Pastry, Recipe and tagged choux pastry, creme patisserie, dark chocolate, green tea, matcha, pastry cream, pâte à choux, sadaharu aoiki. Bookmark the permalink.