Posted on April 8, 2015 by jothetartqueen

I have never tried a crostata di marmellata (jam tart) until I travelled to Italy. I did not even have that in a restaurant because it is not a restaurant dessert but the kind of cake that you find in the homes of nonnas or regular Italians.  I was fortunate to be in a home of Angela, and her homemade jams and crostatas.

While I was staying in this beautiful bed and breakfast in the Umbrian countryside, we were treated to a homemade breakfast feast daily.

For me, her homemade jams were the best and they came in a range of flavours – range, raspberries to marmalades. But it was the crostata di marmellata that made a stronger impression. I was in heaven the moment I tasted her homemade jam crostata – if memory did not serve me wrong,  it was a strawberry one and it just wasn’t like anything I’ve tried before. It is certainly not some fancy pastry, and it’s never so with Italian sweets, but it was simply delicious.

A crostata is not quite a tart yet not quite a cake – its texture kind of falls in between the two. The Italians seem to have discovered something in this in-between, for it is so good.

Since I had leftover Italian tipo “00” flour from my pasta making foray, I put that into good use in this crostata.

I think the best crostatas are usually made with homemade jam. I may be bias so do go on to use a good store-bought variety if you need to.

I used the mandarin orange marmalade that I made over the Chinese New Year period for this. I loved it in the crostata.

I always love looking at a lattice-top tart. While it may take a teeny bit of patience to do the interlace pattern, the results are always the most pleasing to the eye. I do admit that on lazy days (that occur quite frequently), I simply make a criss-cross pattern or use a cookie cutter to place some shapes on the tart instead.

I filled the two smaller tartlets with nutella for a nutella crostata but I found that the nutella becomes rather dry after baking – I would probably add a little more neutral oil like grapeseed oil to the nutella before baking the next time. Any ideas how to combat that problem is much-welcomed. 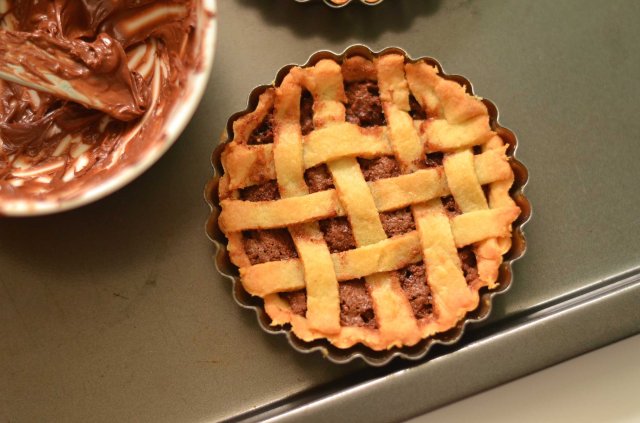 Mandarin orange marmalade – refer to recipe in this post (homemade jam/marmalade would be best in the crostata. If you are using store-bought ones, you might want to whisk the juice of half a lemon so it wouldn’t be too sweet)
you need about 350-400g marmalade/jam

1. Whisk together flour, icing sugar, almond meal and orange zest. Add in cubed butter. Using your fingertips, rub the butter into the dry ingredients until you get coarse breadcrumb-like texture.

2. Add in the egg and vanilla extract (add about 3/4 first) and bring the mixture together until just combined. Add in more egg as needed and stop adding once the mixture comes together. Then shape the dough into a flat disc and cover it with cling wrap and refrigerate for about 2 hours.

3. When the dough is chilled and well=rested, turn it out onto a floured surface and roll the dough out to about 4mm thick and line the tart tins. Roll out the remaining dough and cut into 1 cm thick stripes and use it to form a lattice on the top of the tart.

4. Fill the tart with the marmalade, just spread a thin layer of it – you don’t need a thick layer of it as jam/marmalade is sweet.Place the lattice pattern on top and refrigerate the tarts while you preheat the oven.

5. Preheat your oven to 170 degrees celcius and bake for 40 – 45 minutes or until the pastry turns golden brown. The small tartlets would take about 20 – 25 minutes.

6. Allow the crostatas to cool on a cooling rack for about 10 -15 minutes before turning it out from the tins and cooling further. Serve the crostata with a dusting of icing sugar and some chantilly cream on the side. 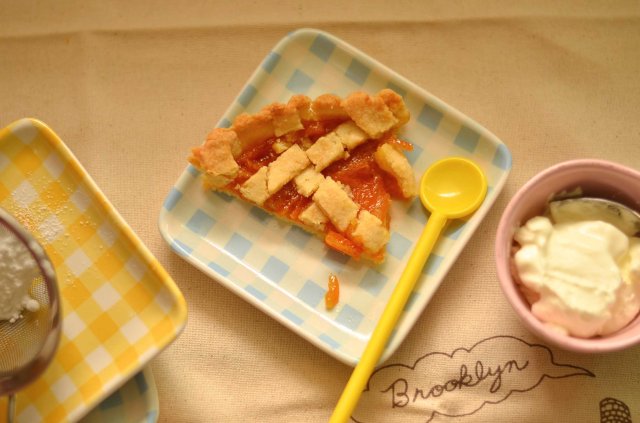 My first love is eating. A very close second is my love for baking and cooking. I passionately believe that the best form of appreciation of something is almost always through the creation of it. This passion took me on a whirlwind, unforgettable ride through the patisserie diploma course at Le Cordon Bleu (Sydney). Join me on my discovery for the love of food – through the kitchen, through the markets, through experimenting, tasting and loving.
View all posts by jothetartqueen →
This entry was posted in Baking, Tarts & Pies and tagged crostata, crostata di marmellata, italian tart, Jam, marmalade. Bookmark the permalink.