Posted on February 27, 2014 by jothetartqueen

Naples was our last stop of our Italy travels and it rounded off our trip on a high.

Prior to our trip, we keep hearing others telling us to take extra care in Naples because they hear that it is dangerous. After all the warnings, I have to admit that I took extra precaution when I got to the city especially while we were at the train station looking for directions.

There was probably little reason to be overly paranoid. We must have looked a little frenzied while trying to juggle two huge suitcases on a public bus while checking the map. A kind elderly woman, probably in her late sixties, spoke to us in rapid Italian. We knew that she was trying to help us but we couldn’t understand a word. The middle aged lady next to the elderly woman caught our blank stares and translated “she’s saying if you are going to the port, you should get off at this bus stop.”

That marked a good start on our Naples leg. The next few days, we continued to meet the good natured people from Naples. They seem very opinionated and loud though. We were always surrounded by boisterous discussions and animated conversations. Not a bad thing though.

After dropping off our suitcases at the B&B and feeling hungry, we asked our affable B&B owners to recommend their favourite pizzeria.

We ate what the Neapolitans eat, pizza napoletana margherita DOC (DOC because it uses buffalo di mozzarella). I have to admit that I’ve been thinking about having that first bite of Napoli’s margherita pizza the moment I booked my air tickets to Naples.

I was pretty close to finishing that huge round of pizza that was maybe twice the size of my face which was quite a feat for me. It’s amazing how just a few ingredients can taste so wonderful –  tomato sauce made from San Mazano tomatoes, buffalo di mozzarella and fresh basil.

We also had a plate of  fritto misto ( mixed fried  platter) and it’s these fried delights appear in the street stores but we happen to have it in this pizzeria. Most interesting is the arrancini (fried rice balls with cheese) and the zeppoline (salted fried pizza dough). That’s a lot of starch and it didn’t sit too well in my stomach.

To wash away all the greasiness and starchiness of lunch, we took a long walk around the compact Naples city center. We found ourselves at Piazza Dante and decided to have a cuppa at Caffe Mexico (one of the city’s best). 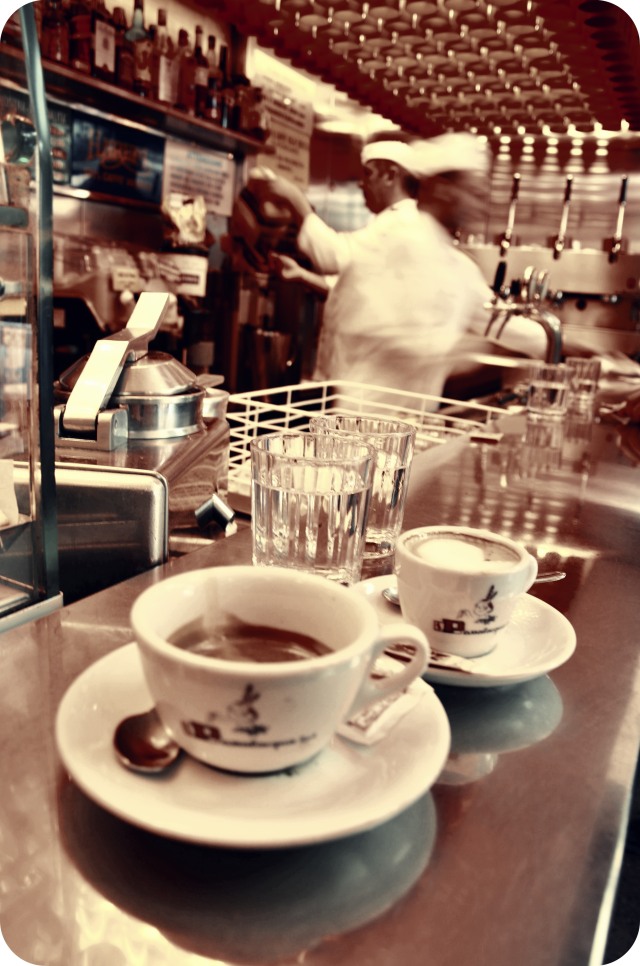 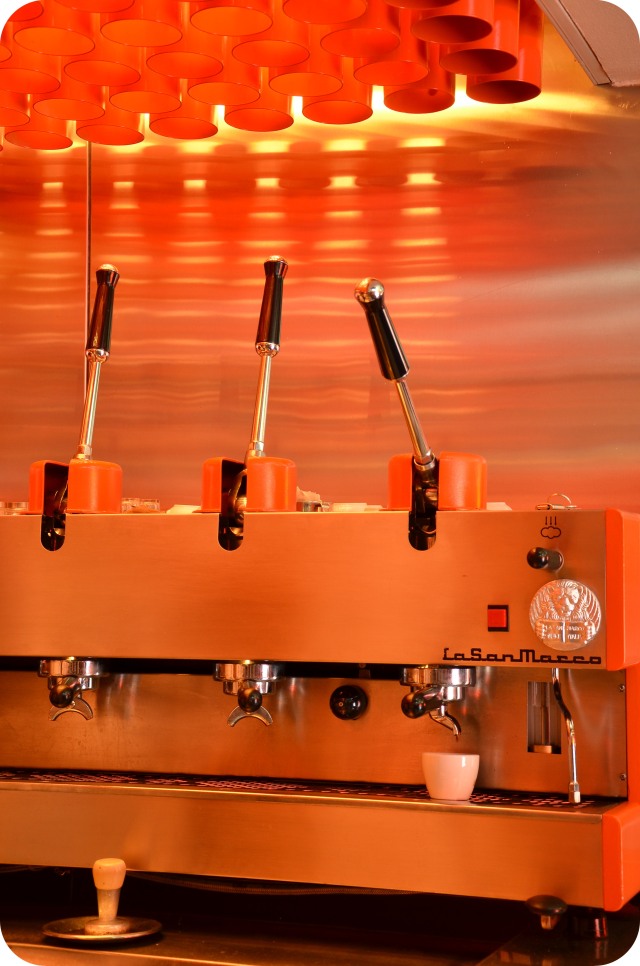 Walking into Caffe Mexico is like stepping back into a time warp, bright orange decor, a standing coffee bar with its baristas in sailor-like uniforms. You order and pay at the cashier and get a ticket which you will give to the barrista so that he can prepare your order. Most locals down their espresso and leave in a few minutes.

Neapolitan coffee is a lot stronger than its counterparts. They tend to pull a short shot, almost a ristretto if you would call it.  The coffee is good – fragrant aroma, good crema, and natural sweetness. We went back to have coffee for all the days we were in Naples.

We took a long walk at the Lungomare which was by the sea front in the evening. It was pretty busy with locals taking a evening jog, families with kids in tow and couples so into each other that they barely notice the world. 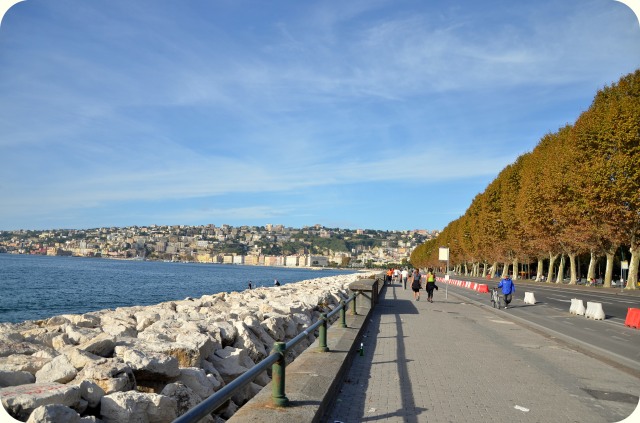 The next morning, we started the day early by taking a walk at the Mecarto Pignasecca. We got there a tad early and had a glimpse of the quiet streets before the city woke up. The outdoor market stores were just setting up so it was great to just watch them while they arrange their produce with care and a certain amount of pride.

You can take in whift of the sea as you walk by the pescherias (stalls selling fresh and live seafood). If only I had a kitchen in Naples! I would have loved to cook with the variety of shellfish, octopus, and fish that they have there.

The fruit and vegetable stalls are full of colour and the produce just looks incredible. We ended up getting some cherry tomatoes here and berries there to eat a long the way.

We walked around the city and found our way at Piazza del Plebiscito, one of Naples’ largest squares standing right in the front of Naples’ Royal Palace. The piazza was full of life with buskers carving out their own spot with their band of audience. We simply took in all of these with a cone of gelato in hand.

But there is so much more sweets to Naples than just gelato. For the four days that I spent in Naples, I had trouble deciding what dessert to have. And too often, I end up with more than one.

There is sfogliatella riccia, a shell shaped pastry with plenty of layers that is filled with flavoured ricotta – usually citurs and  cinnamon, or both. You HAVE to try this when you are in Naples. 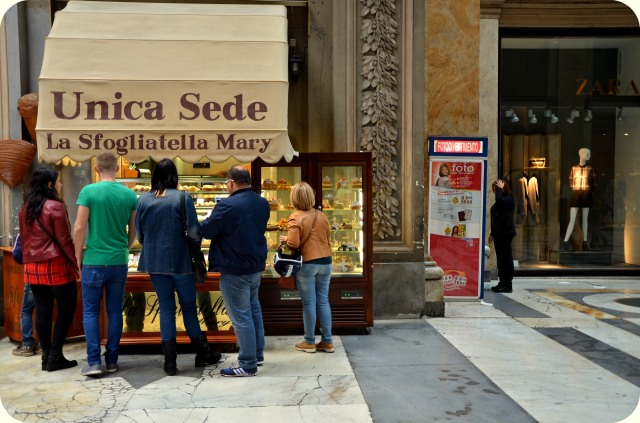 I absolutely adore the ones a  La Sfogliatella Mary, a kiosk right at the door step of Galleria Umberto. First, they are served warm! The pastry layers are so flaky that it can get messy eating it; the ricotta cheese filling is soft and wobbly with the right balance of orange and warm spices. I was so crazy about them that I made sure I got one last sfogliatella before my flight home to Singapore.

Another sweet that gets me wax-lyrical is the Cannolo Siciliano. Sure, it is a pastry from Sicily but you can find these cannoli all over Naples. Not all are made equal of course. The best ones are filled one the spot or freshly filled with not too sweet ricotta filling. The ones at Paticceria Bellavia is more than great. I had at least one cannolo everyday.

We had another  round of pizzas (well, we are in Naples after all!) at  Pizzeria Brandi for history sake. This was  the place where the pizza Margherita was invented. It was good, no doubt, but not a “wow, I definitely need to eat here.” Plus, the service here was a tad sully and unwelcoming.

The place where you ought to head to is Osteria della Mattonella, a family run restaurant. There is only six long tables with benches in this tiny establishment. We went in early just to make sure we get a table and sure enough, the tables were all taken up in no time.

We try our best to get by and we ended with a mind blowing meal. Everything was classic Napoli fare – very simple, unpretentious yet so delicious. The prawns with spaghetti with garlic infused olive oil was incredible – I didn’t want to share it. The polpo alla Luciana (braised octopus in spicy tomato sauce) was tender and full of flavours. The lightly battered and deep fried anchovies served with a wedge of lemon was really amazing. 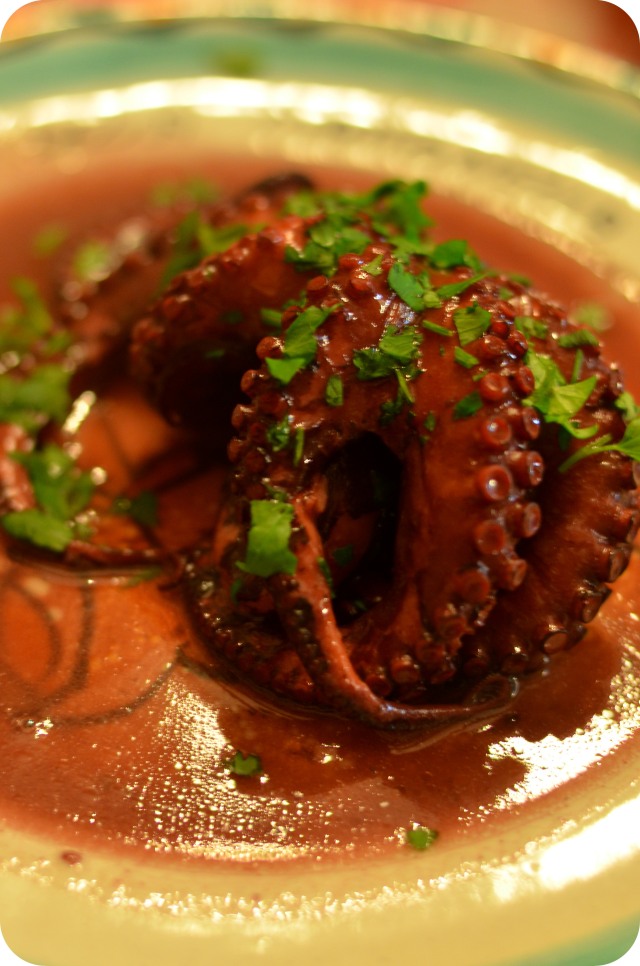 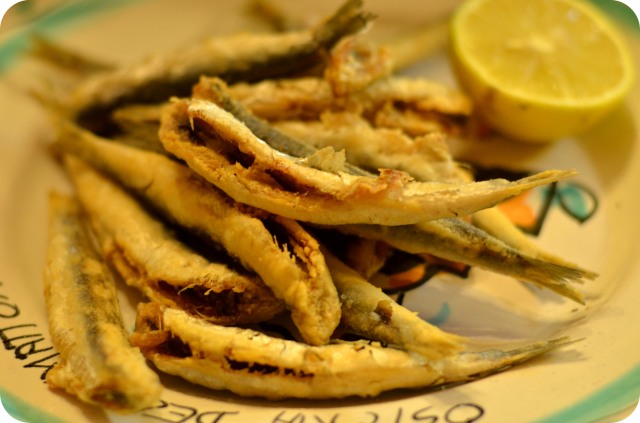 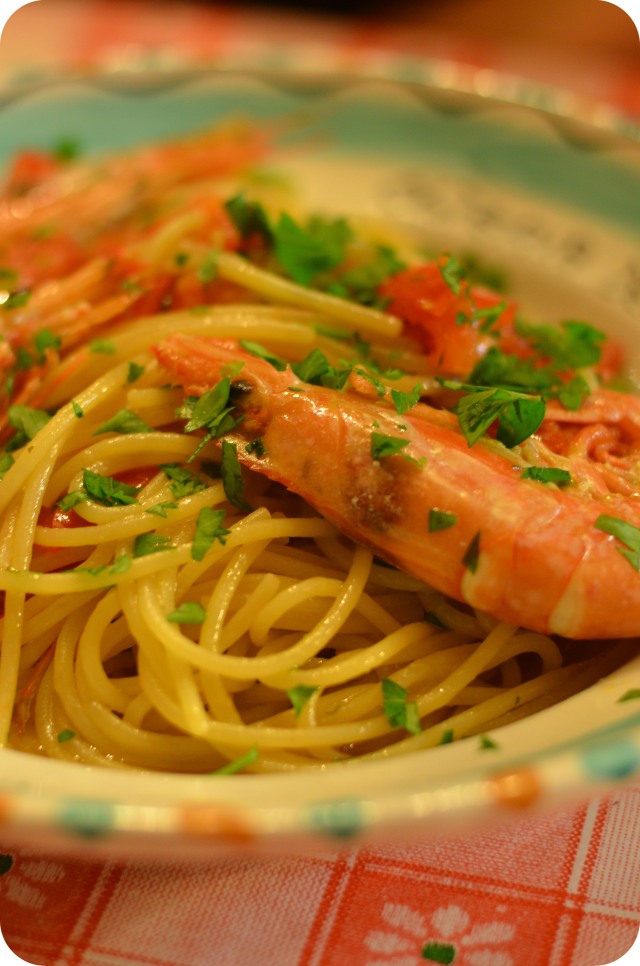 Before I got to Naples, I did not know what to expect from this city (aside from pizzas and mobs).  On first glance, it  may seem a little rough on the edges but don’t judge Naples on first impressions. When you get to know her, you would find the city full of character (loud and boisterous and opinionated) and the food…oh the FOOD! It deserves an exclamation! You will rolling home (on your belly) as  happy as a lark. 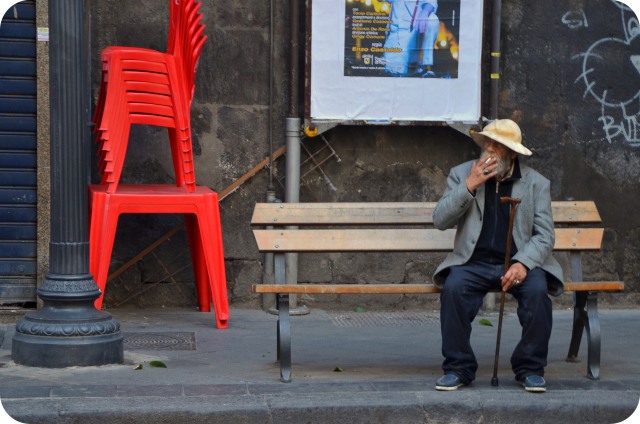 Caffe Mexico
Piazza Dante 86, Naples, Italy
They have other franchises but reviews seem to say that the original one at Piazza Dante is the most consistent.

La Sfogliatella Mary
Via Toledo 66, Naples, Italy
(a small takeaway store at the entrance of Galleria Umberto)
For the best (served warm) sfogliatella in Naples!

Mercato Pignasecca
Via Pignasecca, Naples, 80134, Italy
Open hours: daily (early morning till 1pm)
Basically it runs along Via Pignasecca from Piazzetta Montesanto, this outdoor “market” is one of the oldest food markets in Naples and it specialises in seafood and fresh fruits.

My first love is eating. A very close second is my love for baking and cooking. I passionately believe that the best form of appreciation of something is almost always through the creation of it. This passion took me on a whirlwind, unforgettable ride through the patisserie diploma course at Le Cordon Bleu (Sydney). Join me on my discovery for the love of food – through the kitchen, through the markets, through experimenting, tasting and loving.
View all posts by jothetartqueen →
This entry was posted in Travel and tagged Ciao Italia, italia, italy, Naples, travel, travel photography, travel: naples. Bookmark the permalink.