Posted on September 11, 2012 by jothetartqueen 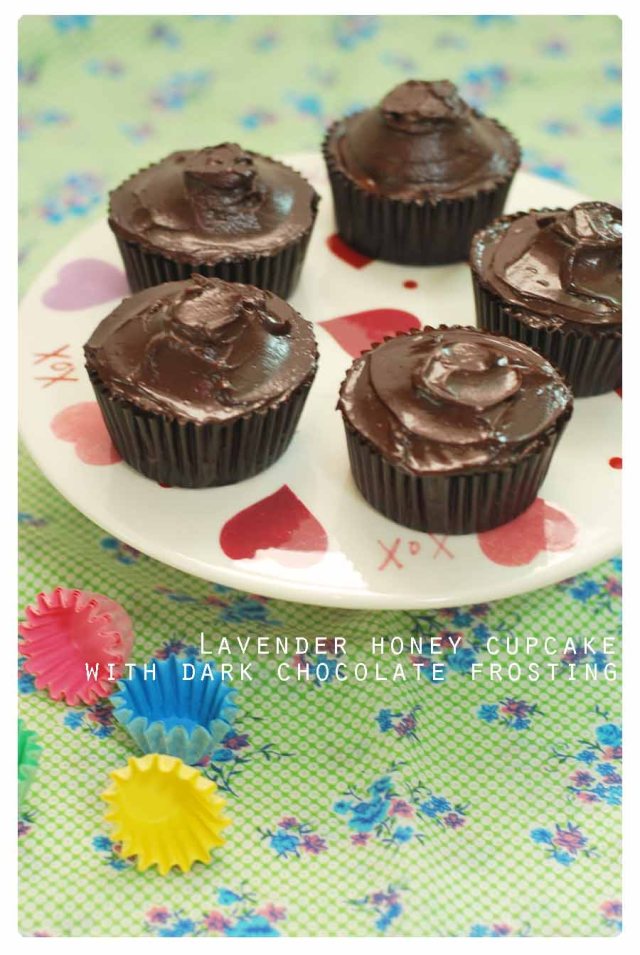 What you see is often what you get. In the case of these cupcakes, the luscious spread of dark chocolate frosting deceives you into believing that beneath it lies something equally chocolatey, plain or somewhere in between.

No one came close to guessing what’s beneath the rich chocolate frosting. Many thought that they were about to bite into a moist chocolate cupcake, perhaps vanilla or even banana but not lavender honey. I guess lavender is just not the most obvious association you draw with chocolate. I really like this pairing though.

I like surprising people that way; the astonished exclamation they make after their first bite “oh it’s lavender! I didn’t expect that” is like a ditty to my ears. Of course I hope that the intonation in their exclamations reflect positive affirmations rather than disapprovals.

In the end, in order to please everyone,  I sprinkled some lavender buds over the second batch of cupcakes to reveal the hidden prize shrouded under the velvet, dark coat of chocolate.

No more mystery. No more surprises. No more fun, at least on my part.

Everyone got what they expected – a moist, richly flavoured lavender and dark chocolate cupcake.

I’ve made some adjustments to New York City’s Magnolia Bakery’s basic vanilla cupcakes recipe. This is a very simple recipe to work with and the cupcakes tastes mightily good on its own. I’ve replaced some of the sugar with honey as I the calming effect that lavender and honey brings is hard to replace.

1. Preheat the oven to 175 degrees celcius and line a muffin tin with cupcake liners.

2. Start by creaming the butter with a paddle attachment at medium speed until smooth. Add in the caster sugar and beat until fluffy, about 3-4 minutes. Add in the honey to beat until combined.

3. Add in the eggs, one at a time, as well as the vanilla extract, beating well after each addition.

5. Spoon the batter into the  cupcake liners filling them about 2/3 full.

6. Bake for approximately 20 minutes in a 175 degrees celcius oven. The cupcakes should be golden brown and it should spring back to touch, or until a cake tester inserted into the cupcake comes out clean.

I use Sweetapolita’s recipe for the frosting for these cupcakes. It is a very rich, smooth and decadent frosting. I would strongly suggest that you do not skimp on the ingredients, quality chocolate and cocoa powder is absolutely essential for this frosting to taste great.

1. Combine cocoa powder and the boiling water in a small bowl or glass measuring cup, and stir until it cocoa has dissolved.

2. In an electric mixer fitted with the paddle attachment, beat the butter, the icing sugar, and salt on medium-high speed until it is pale and fluffy–about 5 minutes.

3. Reduce mixer speed to low, and add melted chocolate (cooled), beating until combined and scraping down the sides of the bowl as needed.

4. Beat in the cocoa mixture until well incorporated.

*You can make this frosting beforehand. It can be stored refrigerated in cling-wrapped, in an air tight container for up to 5 days. Allow the chocolate frosting to defrost on your kitchen counter before beating it up at low speed with a paddle attachment until smooth.

Assembling the cupcakes:
1. Using a small palette knife, scoop up a dollop of chocolate frosting onto the center of the cupcake. Keep the knife angled, and work the icing to the edge of the cupcake.

2. Make a central peak with another small dollop of icing and smooth the palette knife in a clockwise direction to create a swirl effect.

*These cupcakes are best served at room temperature.

*It will keep well in an air-tight container at room temperature if you live in cool climate. However, it’s best to store them in the fridge if you live in a warm climate. You can defrost the cupcake on the kitchen counter for about 15 – 20 minutes before serving. 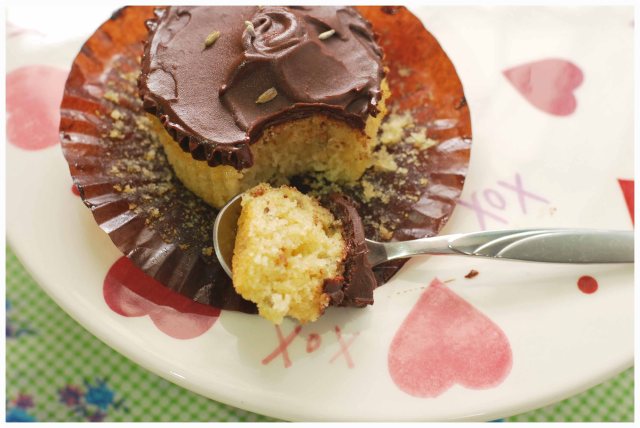 For more chocolate and lavender recipes: check out my previous post for a chocolate lavender tart recipe.

My first love is eating. A very close second is my love for baking and cooking. I passionately believe that the best form of appreciation of something is almost always through the creation of it. This passion took me on a whirlwind, unforgettable ride through the patisserie diploma course at Le Cordon Bleu (Sydney). Join me on my discovery for the love of food – through the kitchen, through the markets, through experimenting, tasting and loving.
View all posts by jothetartqueen →
This entry was posted in Baking, Cakes, Dairy, Desserts, Food, Recipe and tagged cupcakes, dark chocolate, honey, lavender, magnolia bakery, use of lavender. Bookmark the permalink.