Posted on January 22, 2012 by jothetartqueen 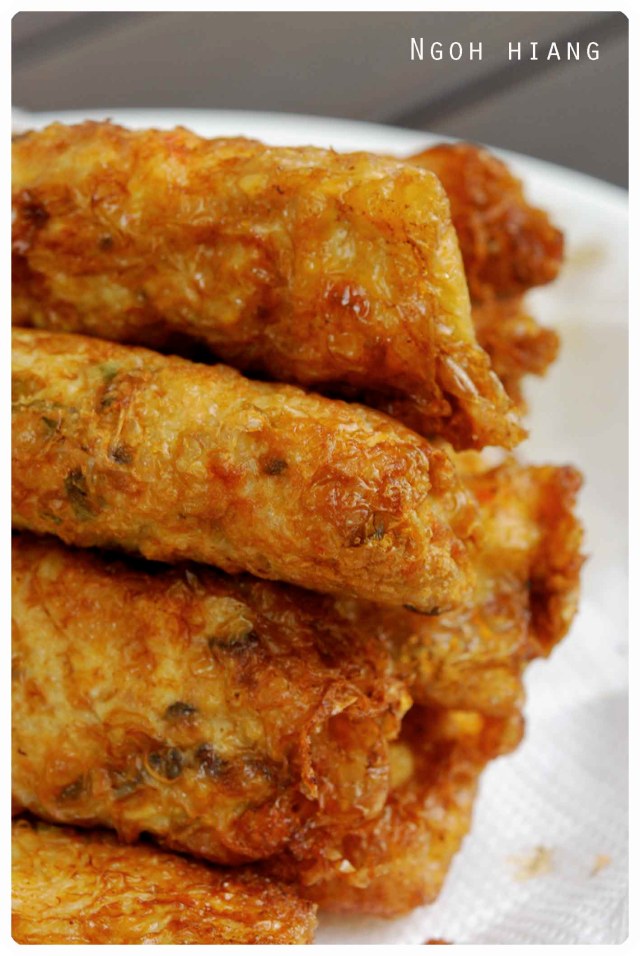 Ngoh Hiang (五香) has and will always have a special place in my heart.

It may seem like an ordinary spiced pork roll wrapped in dried beancurd skin – something that is available commercially everyday of the year.

To me, ngoh hiang is something I associate with Chinese New Year just because my grandma takes on this tedious task of making these every year during this period. And it is the BEST-tasting  ngoh hiang to me for it encapsulates many of my fondest childhood memories.  Ask my sis or my cousins, and they will tell you that our grandma’s ngoh hiang is simply the best. Such is the power of childhood memories.

I remember spending hours in the kitchen watching and sometimes helping (or disrupting, in my grandma’s opinion) my grandma make and roll out the ngoh hiang. Since she is a perfectionist, she gets frustrated that my ngoh hiang is not up to her standard – I’ve got to admit that when I was young, I was just having my bit of fun in the kitchen and I never took learning seriously. My rolls often end up in the ‘test batch’ as they came in  different shapes and sizes and sometimes not wrapped tightly enough. Sometimes if I ‘spoil’ too many ngoh hiangs, she would ban me from touching the rest of them. 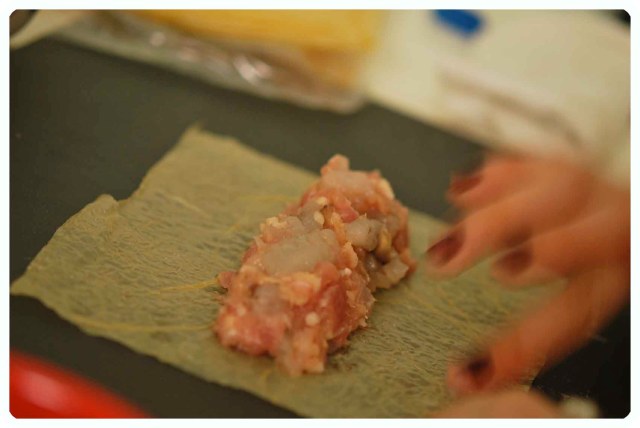 This year, I took on a more active role in my grandma’s yearly ngoh hiang-making endeavor – helping her from the chopping of the ingredients to the wrapping of the ngoh hiang.  That’s because she now has more trust in my ngoh hiang now that I’ve proven my skills worthy in her kitchen.

Ngoh hiang is a Singaporean dish, and is popular with the Hokkien and Teow Chew dialect group. Its name translates to “five spices”, which is the main flavour profile of these rolls since they are spiced with Chinese five spice powder (grounded mixture of cloves, cinnamon, star anise, fennel seeds, Szechuan peppercorns).

I’m sure that many Chinese families in Singapore has their own version of the ngoh hiang and my family is no different. Our recipe is no longer traditional but has evolved over the years from the additions of different ingredients – we use minced pork for the base, prawns for the sweetness and texture, water chestnuts and turnip for the moistness and crunch, spring onions for the flavour and colour, and dried shiitake mushrooms for the woody flavour. Feel free to tweak and experiment with the proportion of ingredients to your preference – that’s the beauty of ngoh hiang making.

Every bite is just as beautiful as it is precious.

Happy Lunar New Year and have a prosperous year ahead! Load up on the ngoh hiangs and pineapple tarts before Chinese New Year festivities are over!

Method:
1. Mix in the minced pork, chopped prawns, water chestnuts, turnips, mushrooms and spring onions.
2. Season it to taste and add the whisked eggs and cornflour. Combine till even.
3. Add in a dash or two of water to the final mixture to loosen it up.

To wrap ngoh hiang:
1. Prepare the dried beancurd skin by cutting them into equal lengths.
2. Put the minced meat mixture onto the centre of the beancurd skin.
3. Dip your finger into the egg white wash and the sides of the beancurd skin. Wrap and roll and secure the sides so that the filling will not spill out while frying.
4. Steam the wrapped rolls for about 8-10 minutes. At this point, you can choose to refrigerate or freeze the rolls until you are ready to fry and eat them.
5. Deep fry the rolls in a wok of hot oil. Make sure that the oil is enough o cover the rolls. Deep fry them in batches until golden brown.
6. They are now ready to be served. 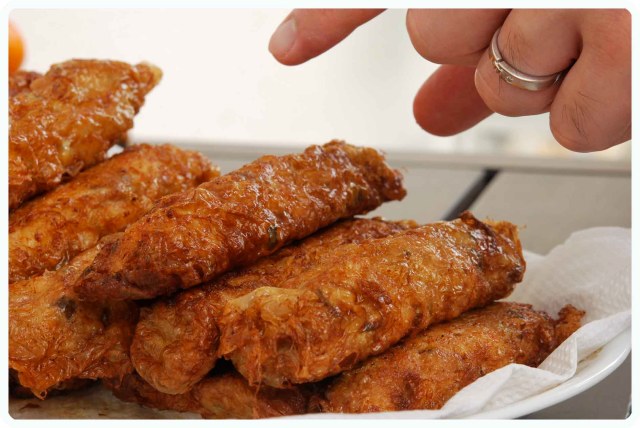 My first love is eating. A very close second is my love for baking and cooking. I passionately believe that the best form of appreciation of something is almost always through the creation of it. This passion took me on a whirlwind, unforgettable ride through the patisserie diploma course at Le Cordon Bleu (Sydney). Join me on my discovery for the love of food – through the kitchen, through the markets, through experimenting, tasting and loving.
View all posts by jothetartqueen →
This entry was posted in Cooking, Festive, Food, Recipe, Savoury and tagged chinese new year, Food, ngoh hiang, Recipe. Bookmark the permalink.